It may be that the dry conditions last year had a knock affect affected the plants that normally flower around this time as several displays were worse than last year.

Growth might be slightly behind last year in a few cases.

Tulips
The Tulipa flowered quite late and were there for a good part of the month. 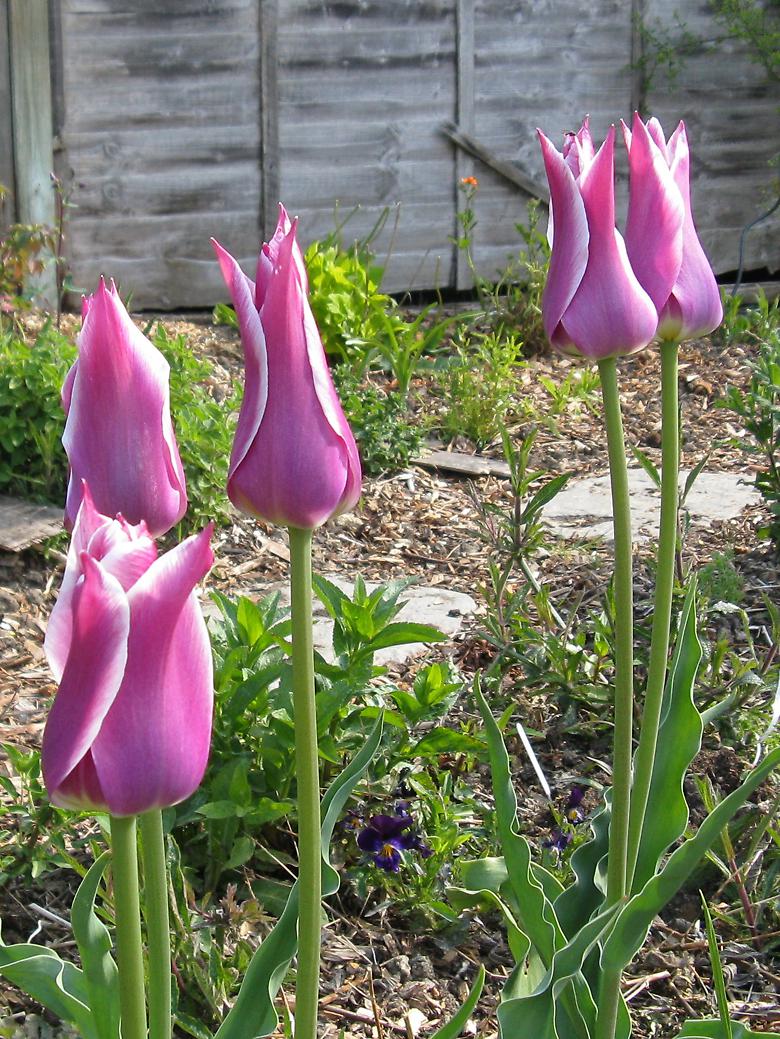 Polygonatum
This grows in a part of the garden that is not particularly shady and is still doing well. I may move it as this is a prime sunny spot for plants that will appreciate it. 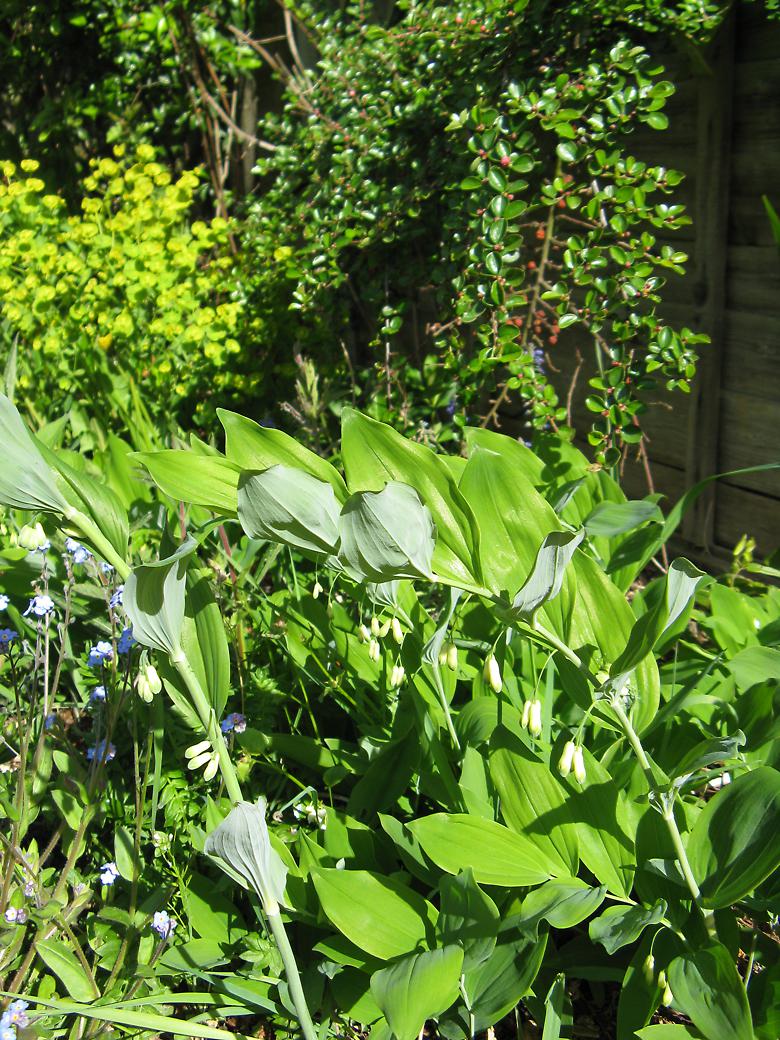 By a happy accident I received these daffodils instead of the early flowering ones that I ordered. They were very successful as each bulb produced a couple of flowering stems and some of those stems had more than one flower. So a mere 10 bulbs produced three decent sized clumps.

My best guess as to what they are is the variety 'Katie Heath'. 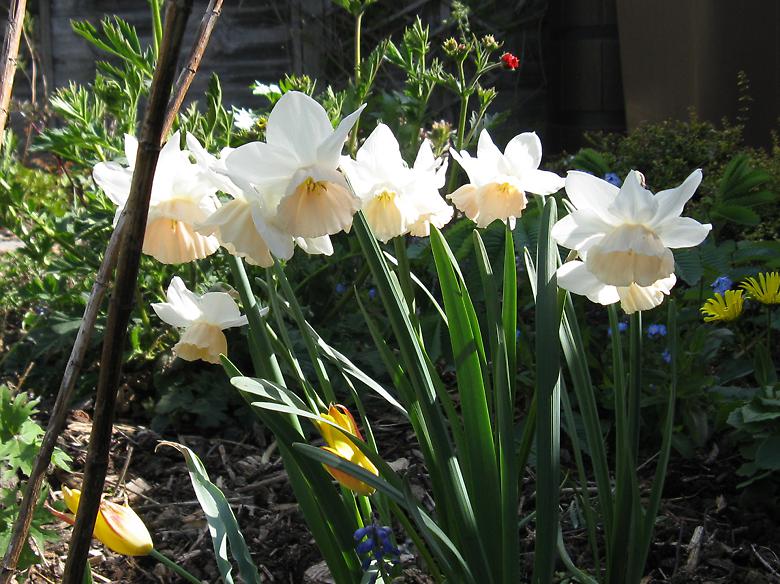 Pulmonaria
This is Pulmonaria 'Trevi fountain' and is much larger than last year. Very popular with the bees. 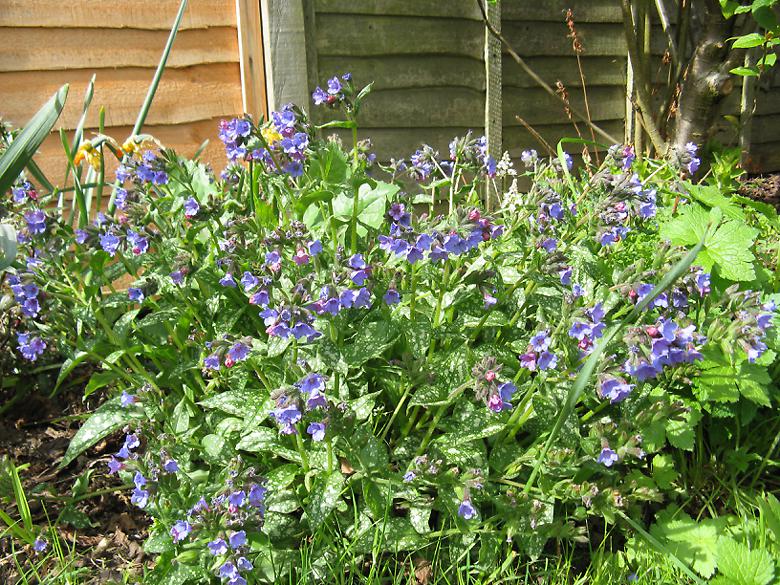 Brunnera 'Looking glass'
This didn't flower last year and took a long time to get going, although it turned into a striking foliage plant later in the year. This year however it is growing much better and is flowering well. 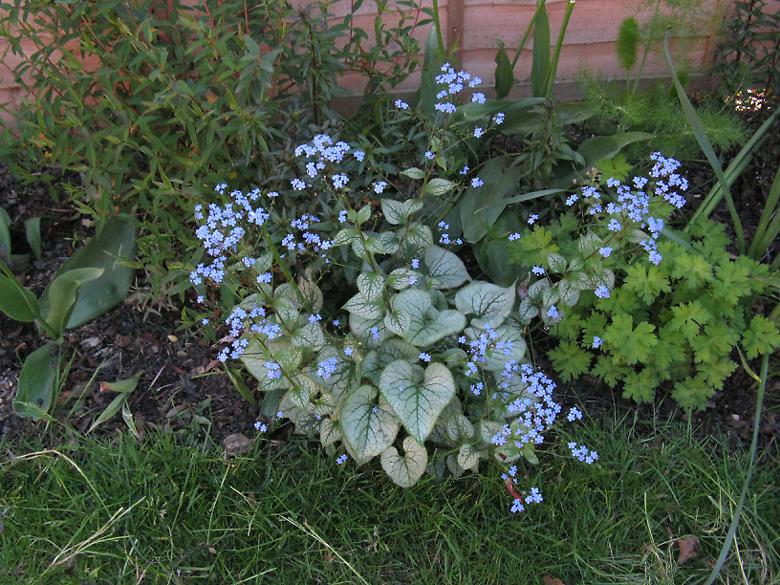 Ipheion
I planted around 80 or so Ipheion last year; half a blue variety and half a pink one. I counted less than 50 appearing, and there were not too many flowers and only two of the blue ones. The ones planted last year did not appear to return or did not flower. So a bit disappointing. 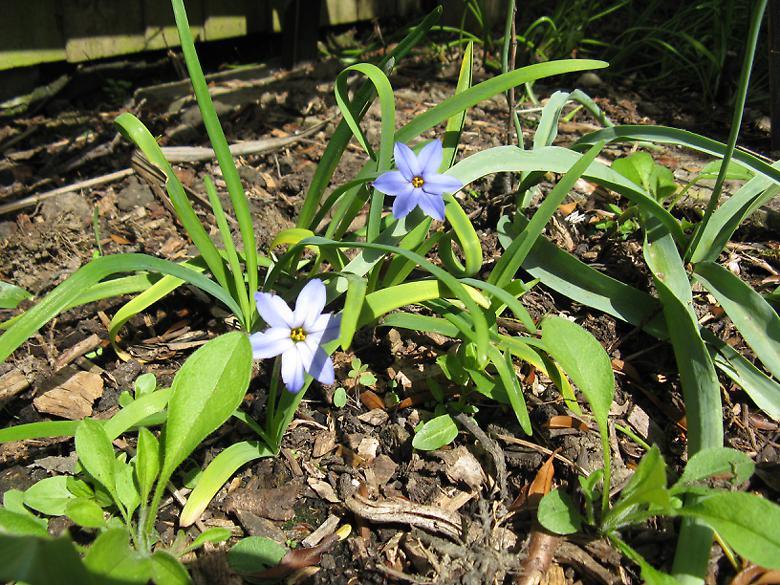 Tiarella 'Spring symphony'
This is the only Tiarella that has flowered well so far this year. The others had few flowers that did not last long. The flowers may have been eaten. The 'Sugar and spice' had few flowers and has not even many leaves so far. The 'Mystic mist' has lost most of its leaves, it may recover and I believe it is meant to flower later in the year as well as in the spring. 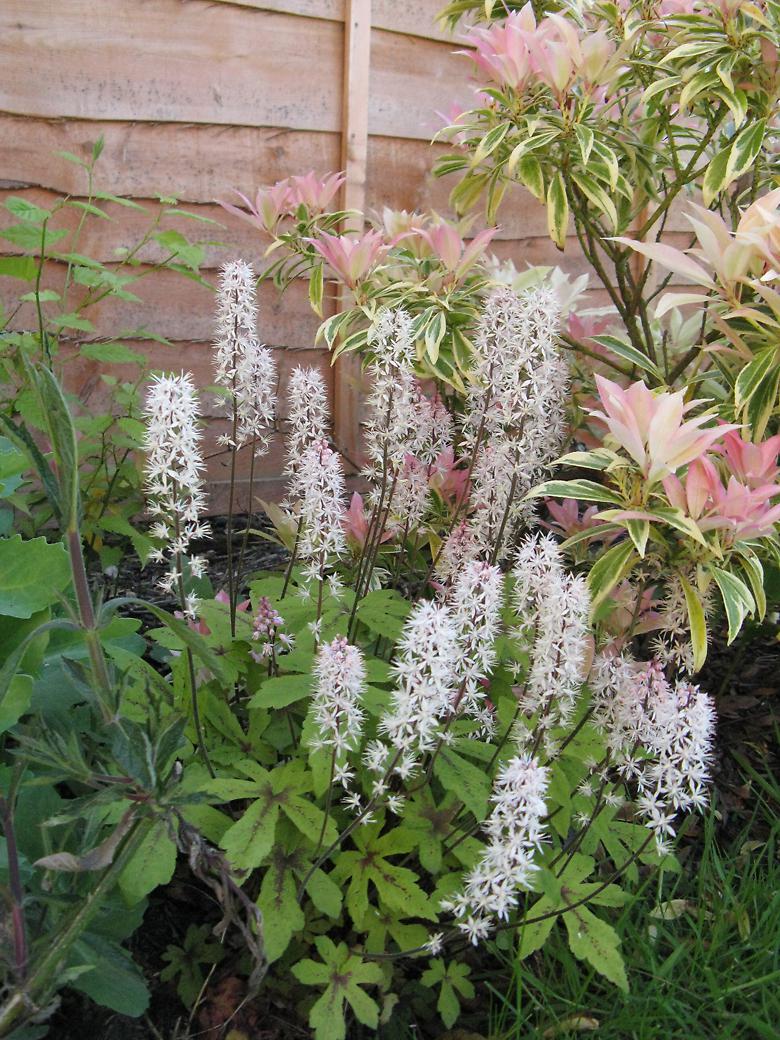 The early Clematis reverted to a very poor show of flowers this year. My hope that it was recovering and would have more this year was not borne out. I am considering replacing it.

There has been a Clematis near the Cordyline that grew to no more than a couple of feet in length in the previous two years. I had assumed that it was from a seed as it seems to me to be a bit far from the fence and trellis to be a deliberate planting. I just let it trail along the ground.

This year it clearly had a flower bud so I've started trying to train it up to the trellis. The stem with the flower is not long enough to reach however so it is not easily visible. It is a lovely flower so I'm hoping that it establishes fully and produces many more flowers next year. Given it is such a pretty flower I may be wrong about it being from a seed. 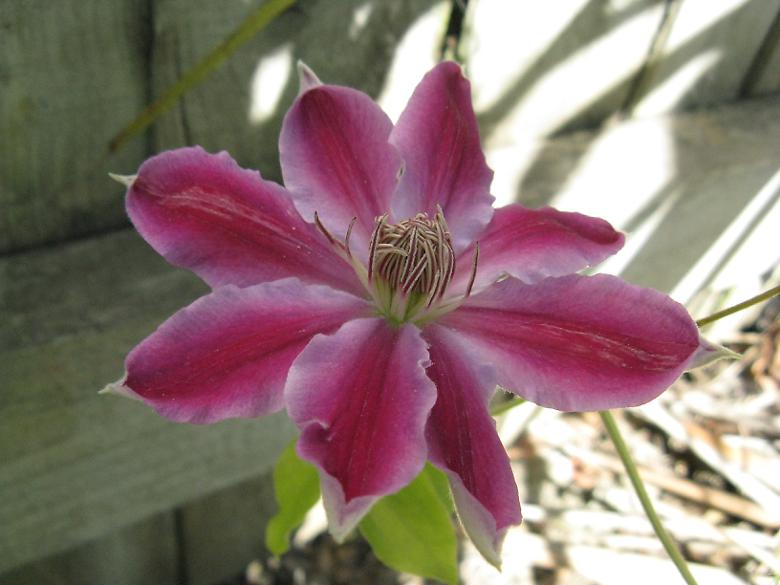 Geranium
This an evergreen geranium that came with the garden and is always the first to flower. 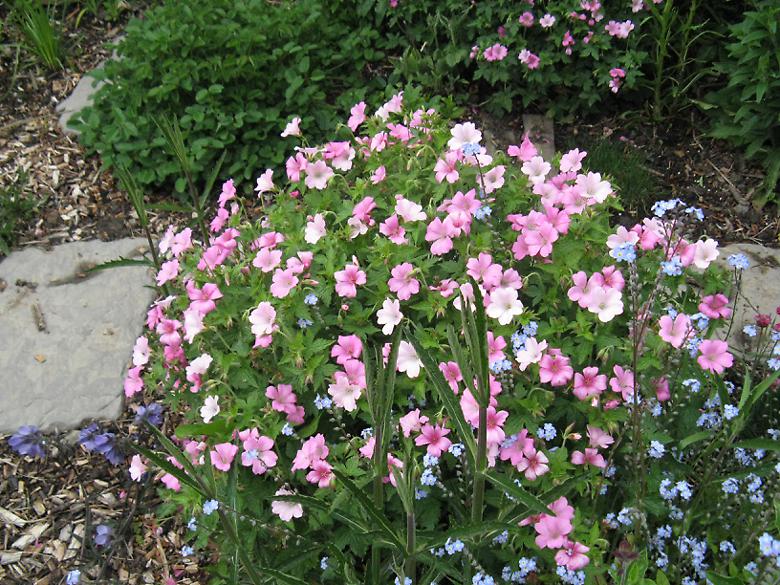 Veronica austriaca 'Venice blue'
I moved this so that it would no longer get smothered under the leaves of a Sidalcea, so hoping that it grow into a larger clump. It was just starting to flower at the end of the month so not at its best yet. 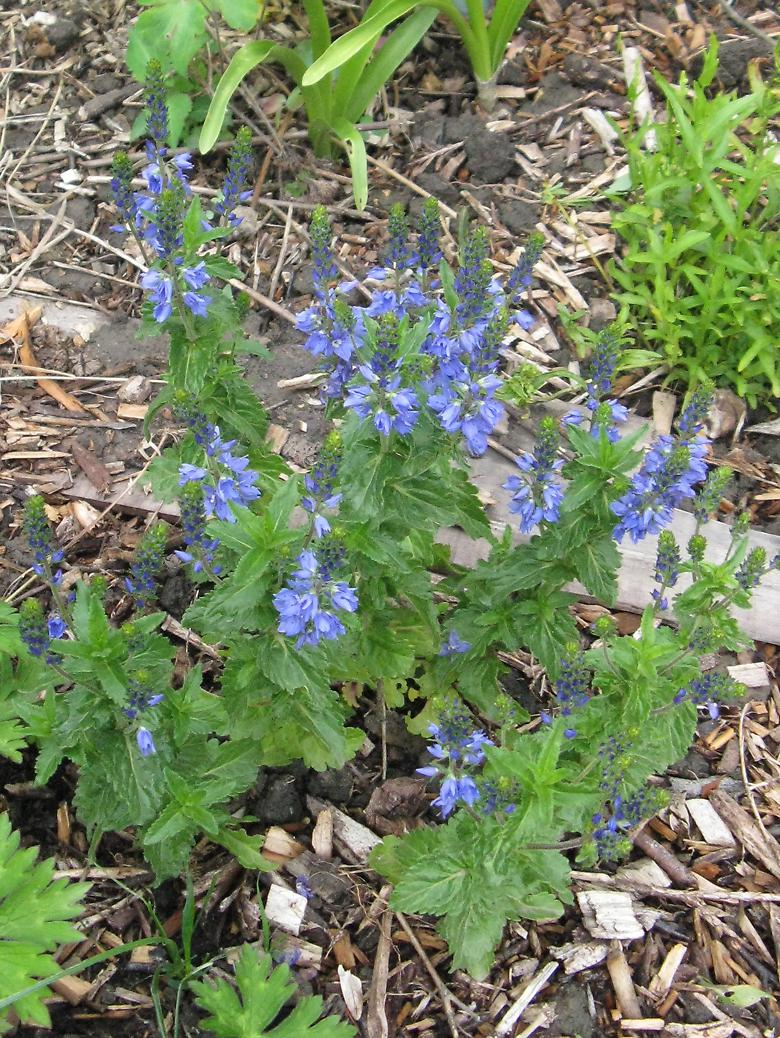 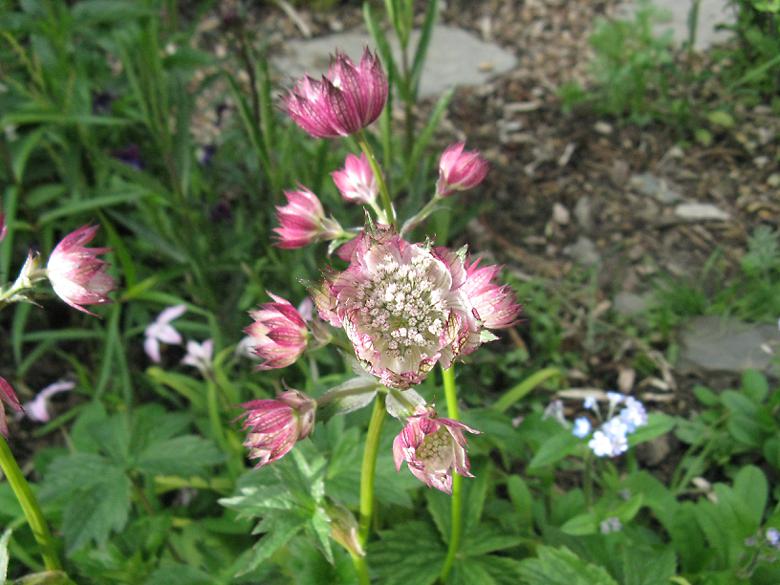 This is most of the plants flowering this month. I am bound to have forgotten something, but it is reasonably complete.

I completed the right hand bed by digging up the remaining part of the lawn between the two areas that were already dug and planted. This finally gave me space to plant up the plants that I bought earlier in the year.

There is going to be a slate covered area in the center of the bed so that all parts of it can be accessed easily and I hope it will look good! 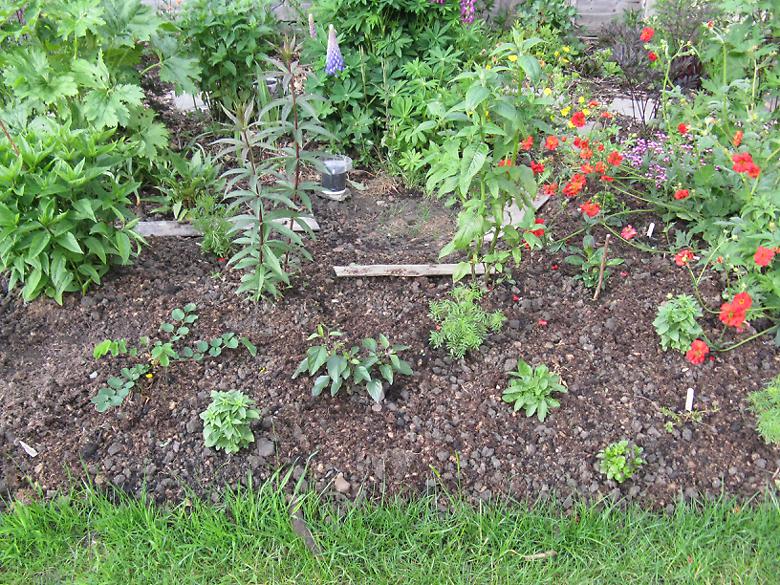