Today was very mixed, it rained and then was sunny and then rained again and so on, managed to get these pictures during a sunny spell.

It is now over two years since my very first Six on Saturday. Interestingly the lavender was much more advanced in that year than it is now. I no longer have any Crocosmia.

For more up to date sixes visit our host The propagator for this weeks slices of six around the world.

I think that this (the pink flower) is the musk mallow Malva moschata. It grows wild around here and I've also seen it for sale.

There has always been the odd plant in the garden, but this year lots of seeds have grown and there is a good display. It was entirely unplanned but I think it looks quite good with the yellow of the Lysimachia punctata 'Alexander'.

The flowers are very similar to the Sidalcea that you can also see in this picture (top left) but with brighter colours. 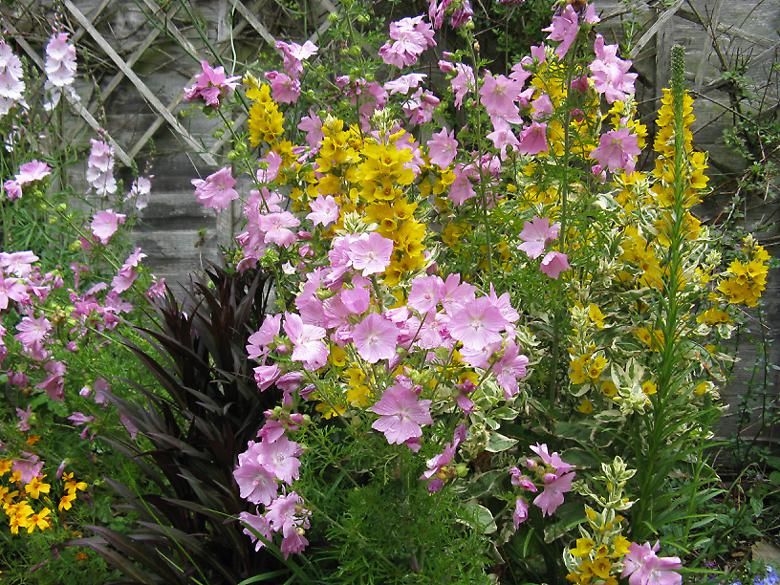 This is the area that completes the new area on the right hand side of the garden. I planted it up earlier this year. There are several of the new perennials here which are not really visible and the gaps are filled with some annuals; Tagetes (yellow and orange), lemony yellow snapdragons, the red Salvia 'Wendy', lobelia and a Gazania.

Like in the first item, I'm liking this temporary display. 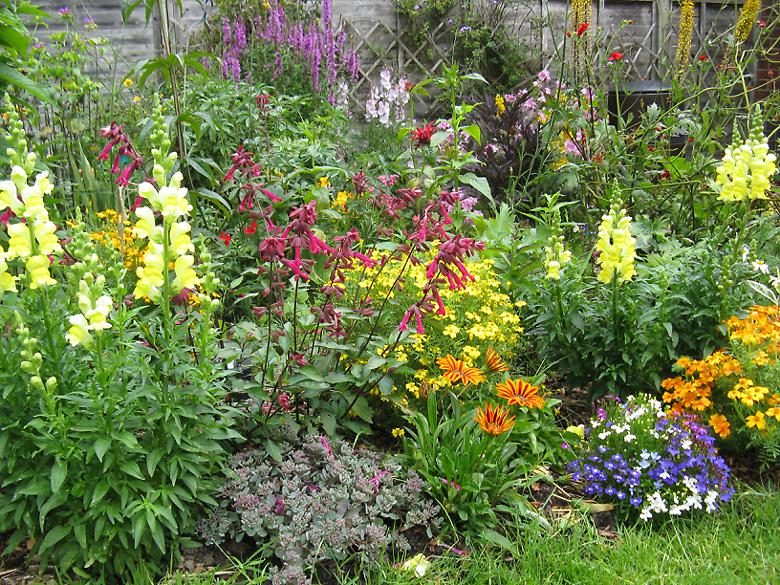 I've added a few new Phlox this year. This one has just recently started flowering. Its a different species to the others I have and has much more slender leaves. 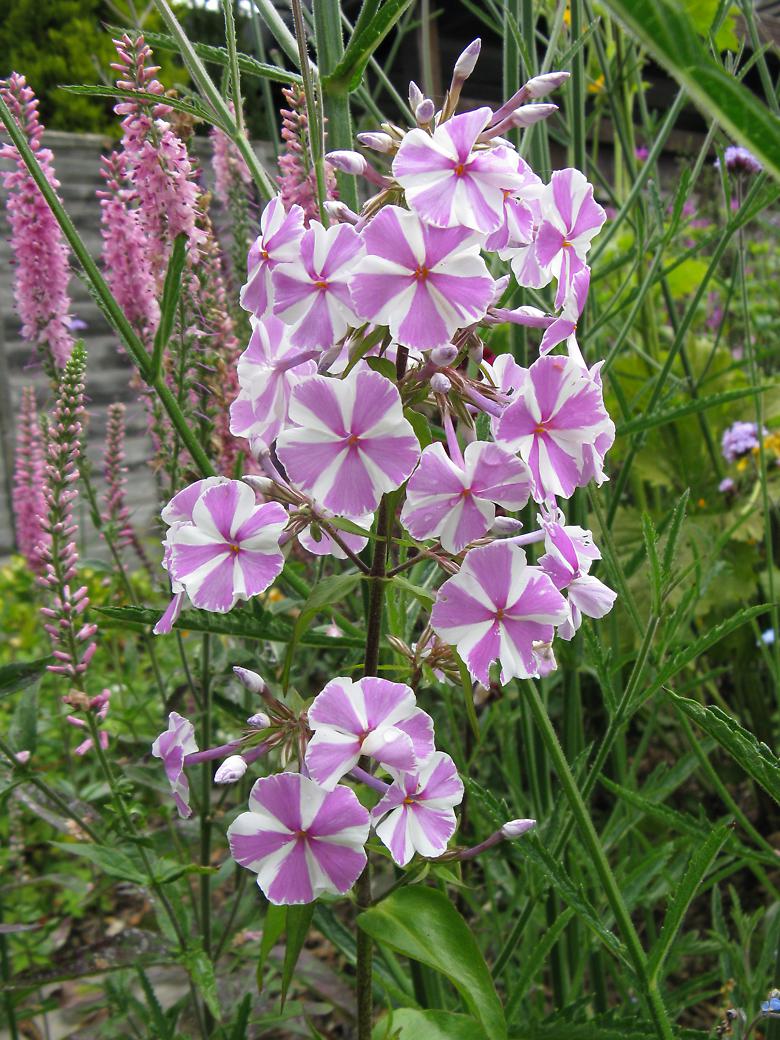 I did not expect these to flower so late and so they are planted in an area where summer plants would grow in front of them. Fortunately they are not completely hidden.

The flower stalks have been growing for what seems like an age and I thought there were going to be very small flowers, but they have grown to be a decent size. 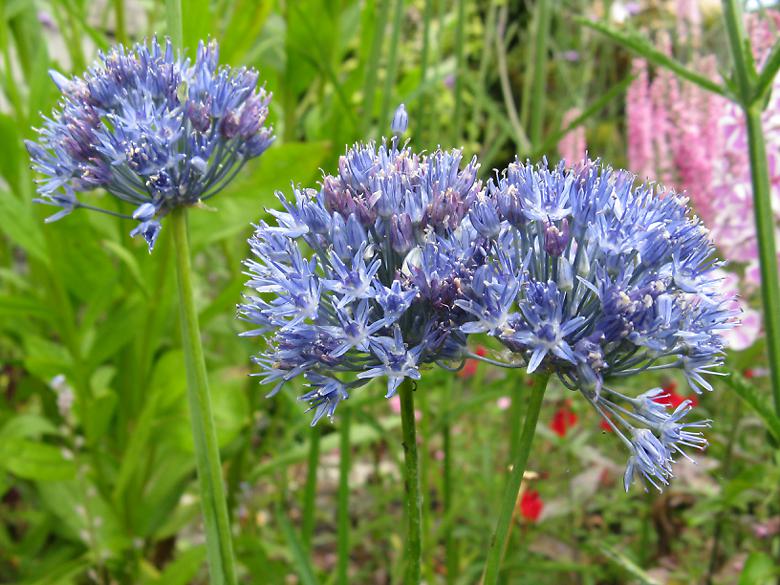 This is my most expensive plant! It wasn't that big when I got it but it grew very fast and this week the first flowers started to open. They look very exotic, but I've seen them survive in gardens round about, so I'm hoping that this one will survive the winters here. 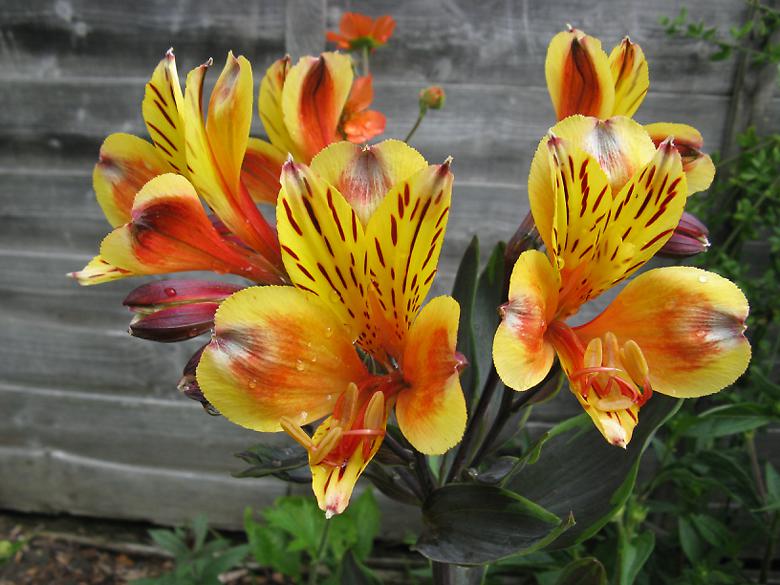 When I was young I read a story in the Daily Express about an plant that had appeared growing in someones garden. The bulk of the story made out that it it was some kind of mysterious alien plant that glowed in the dark with weird lights. Finally at the end of the story it said it had been identified as a common Teasel.

Alien they are not, but still an unusual plant and I've always wanted to grow one. They are biennial and of course the best time to plant one is last year, so it never seems to be the right time. I realised this last year and found a space for the large rosette of leaves during its first year.

This year it is taking up very little space, but is very tall and finally here is my first teasel flower. 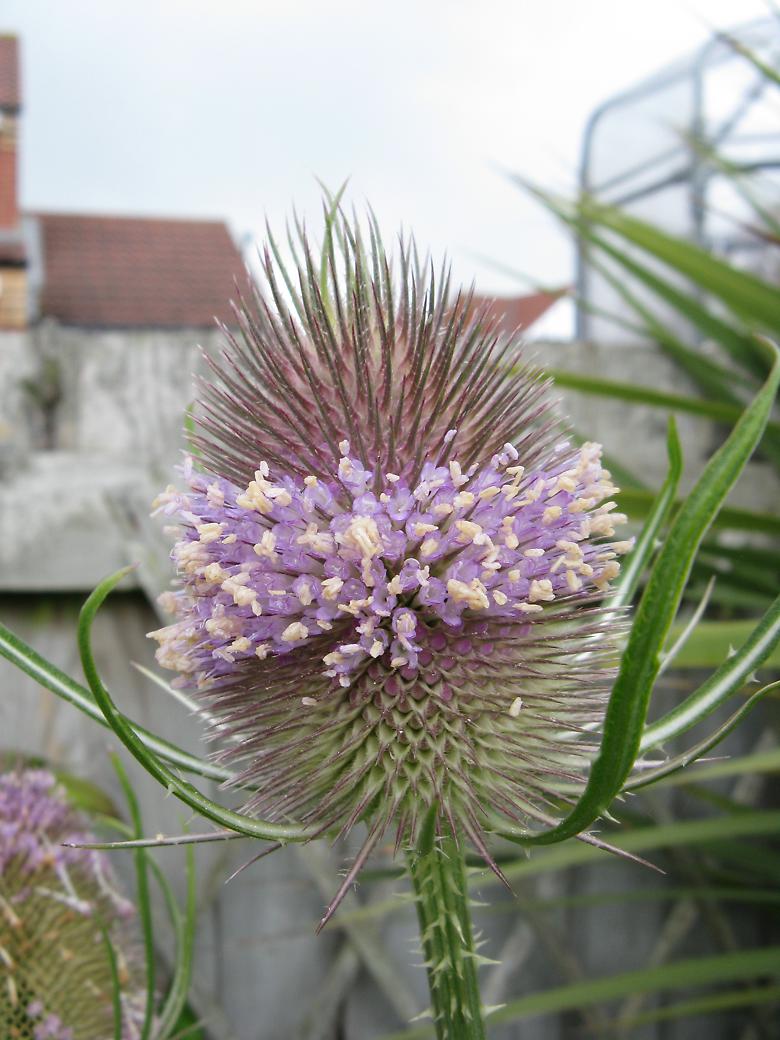