There was 63mm of rain, almost identical to last years 62mm.

Ligularia 'Little rocket'
Just the second year, but already lots of flower spikes on this. 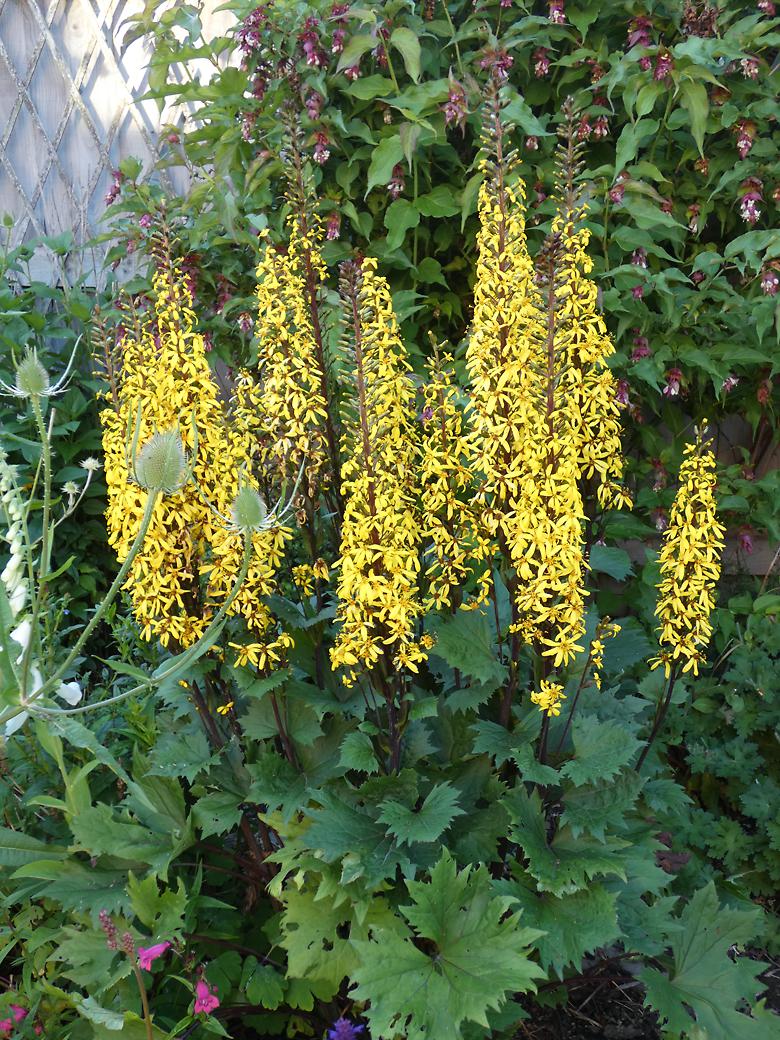 Ligularia × yoshizoeana 'Palmatiloba'
This is a very big plant and I need to move nearby plants that are being shaded out. 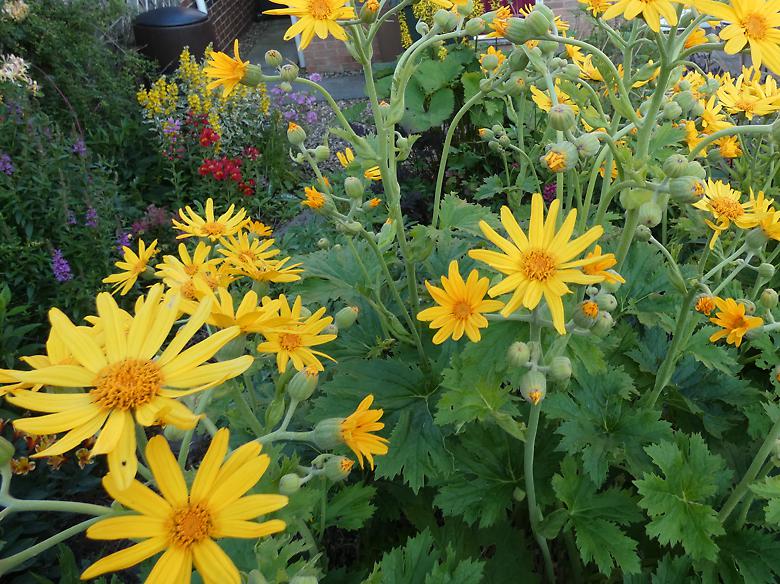 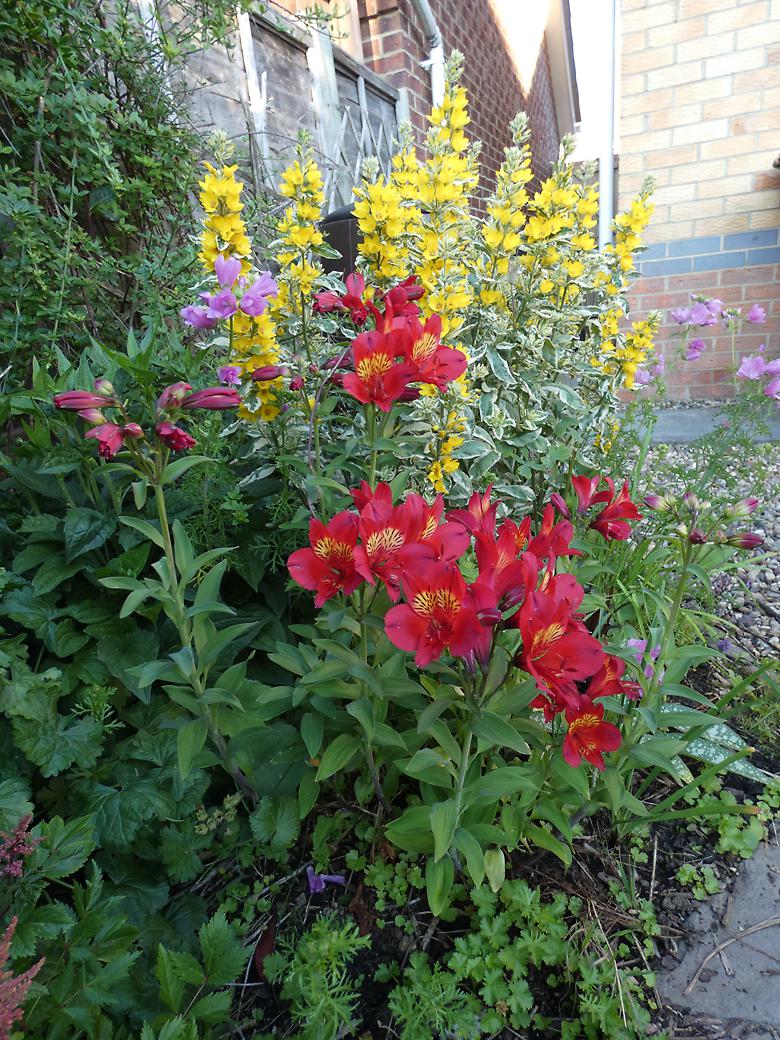 Ligularia 'Zepter'
In the foreground, the large yellow flowered plant behind is the L. 'Palmatiloba' 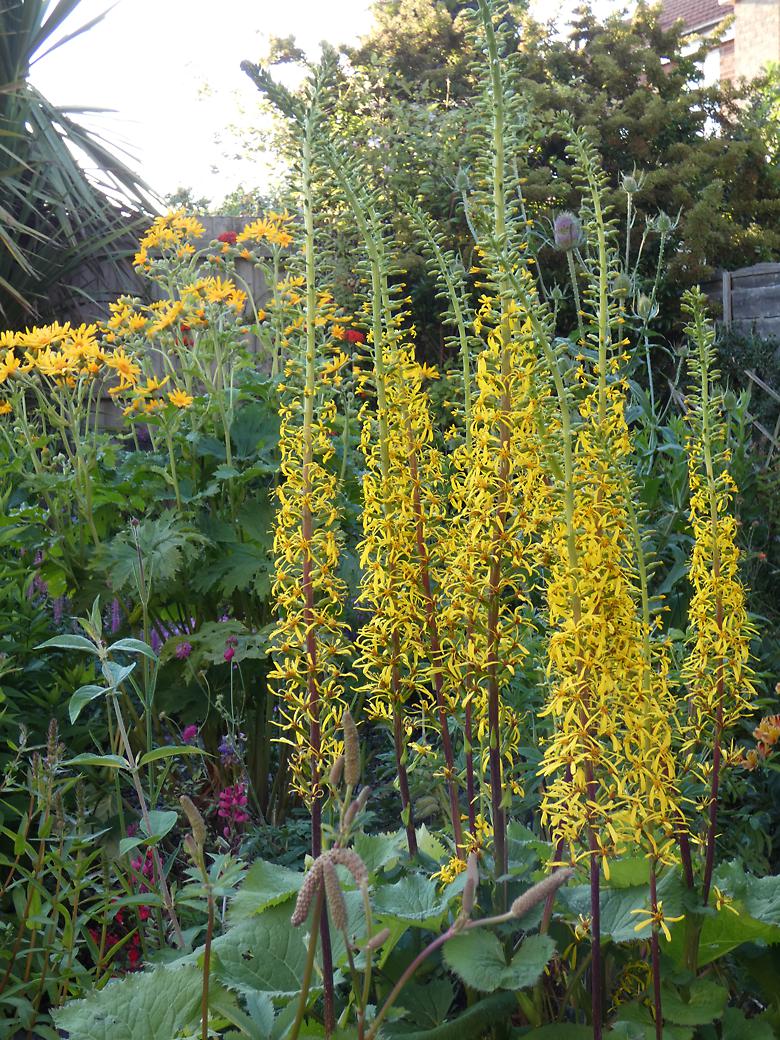 Teasel
I don't really have room for one Teasel, never mind the three large ones that I currently have, it wasn't a great idea to let so many grow. I hope this gives a reasonable idea of just how large and branched it is. 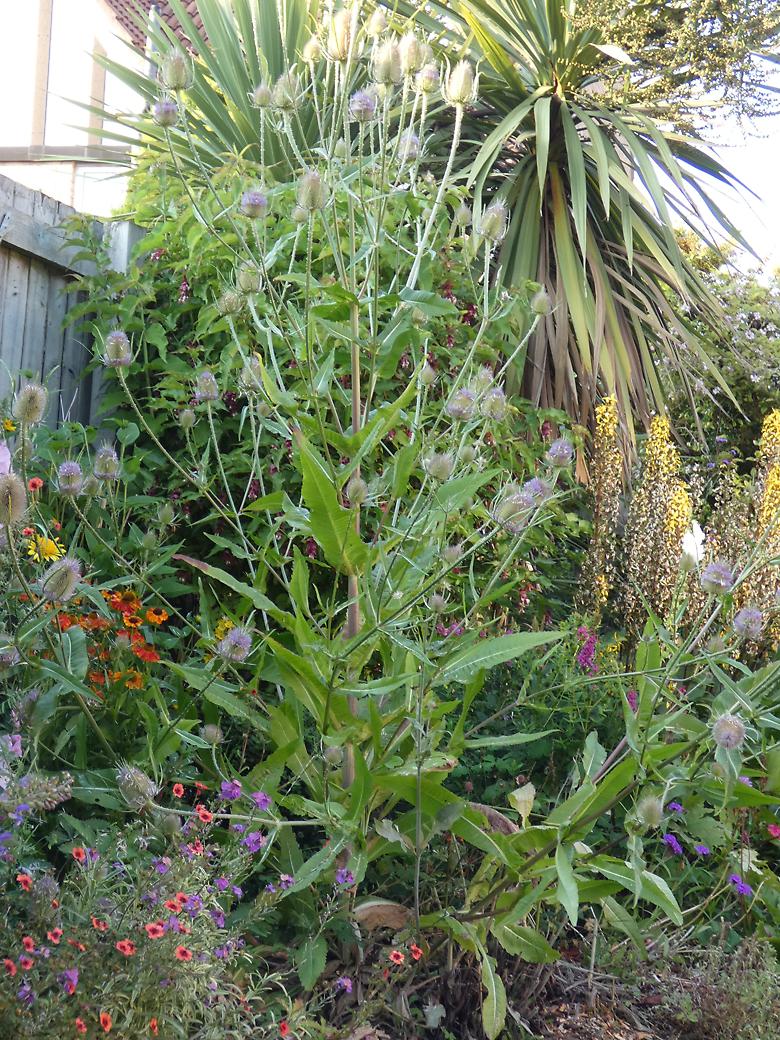 Random Leucanthemum from a seedling

I saw a seedling that looked interesting and could be a Leucanthemum, and it has indeed turned out to be one. It is much nicer than the nearby one which has rolled petals which sounded interesting when I bought it but which I don't really care for much. 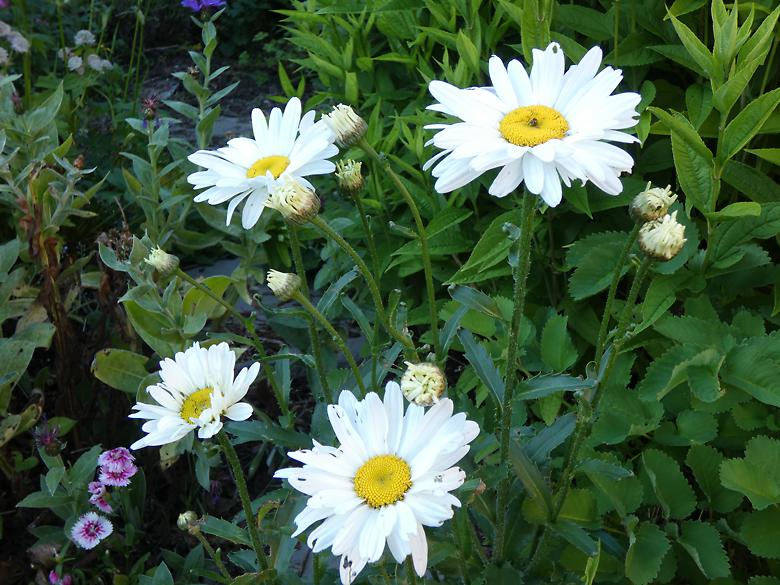 Grown from seed from the Hardy Plant Society. I was supposed to be Salvia × superba so was a suprise to turn out to be Salvia forsskaolii instead. 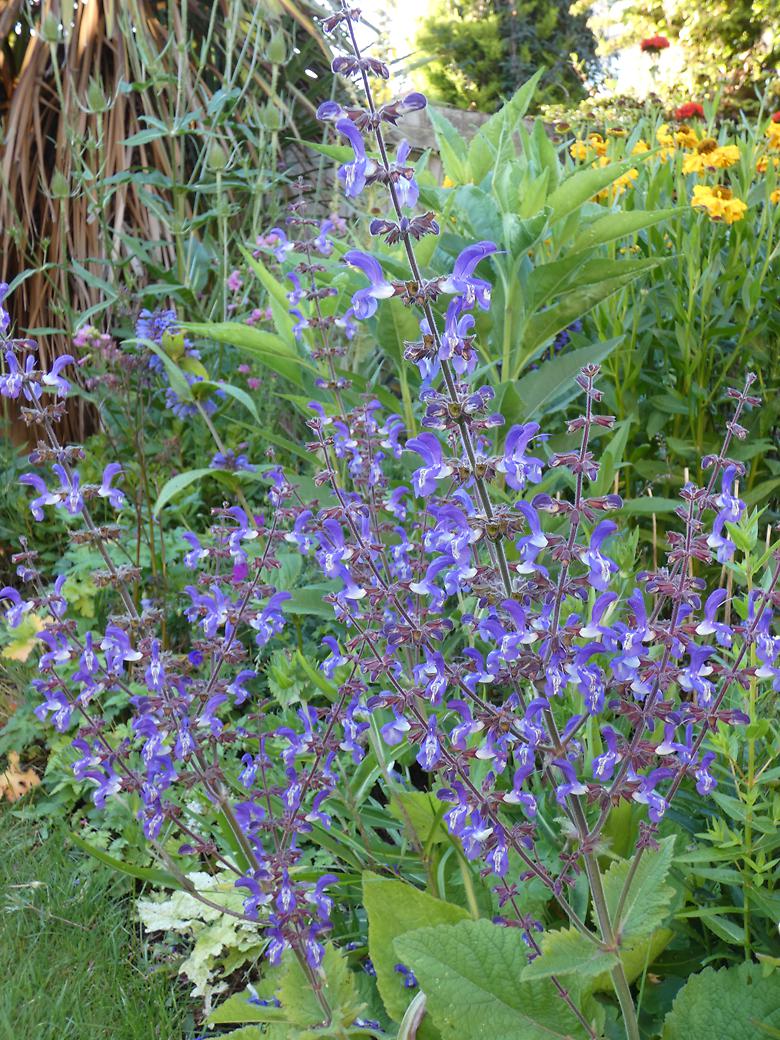 It was much drier this year only 16mm of rain compared to 89mm last year.

First picture is a view of part of the the back border. Here you can see:

With one of the Teasels towering in the background with a small bud at the top. 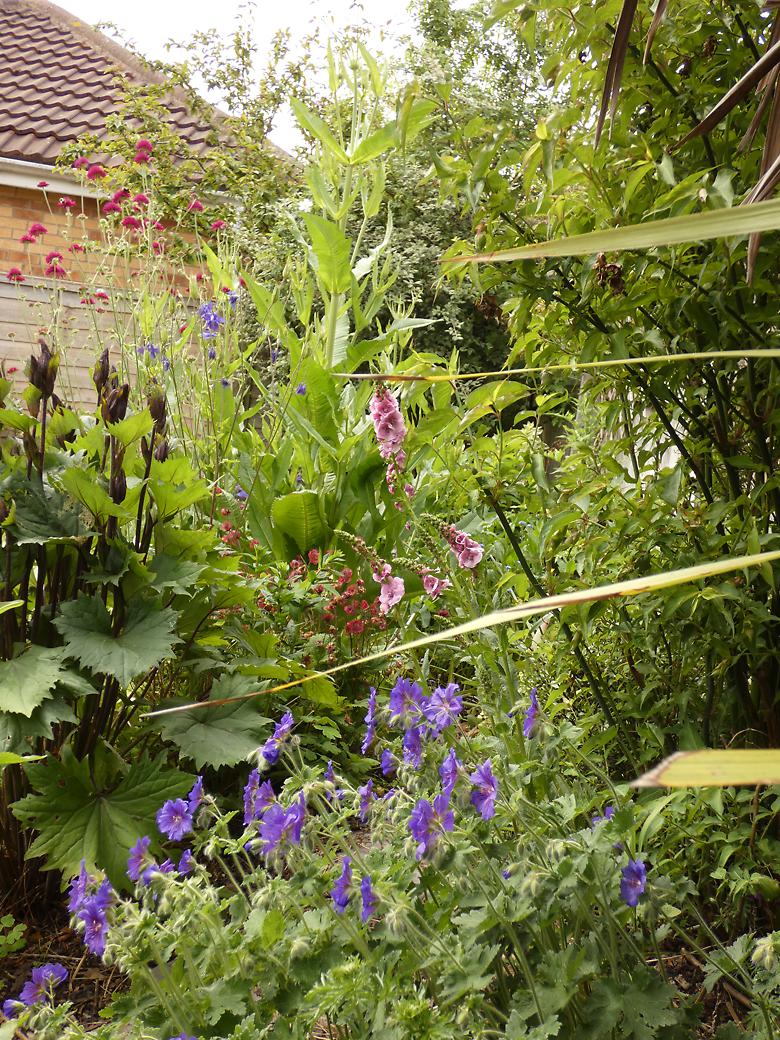 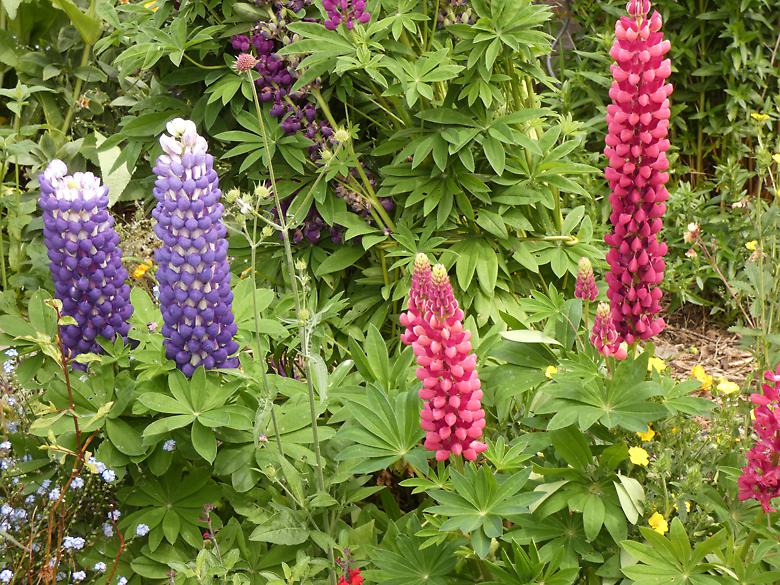 The most amazing Geranium: Geranium × magnificum, shame it flowers for such a short time. 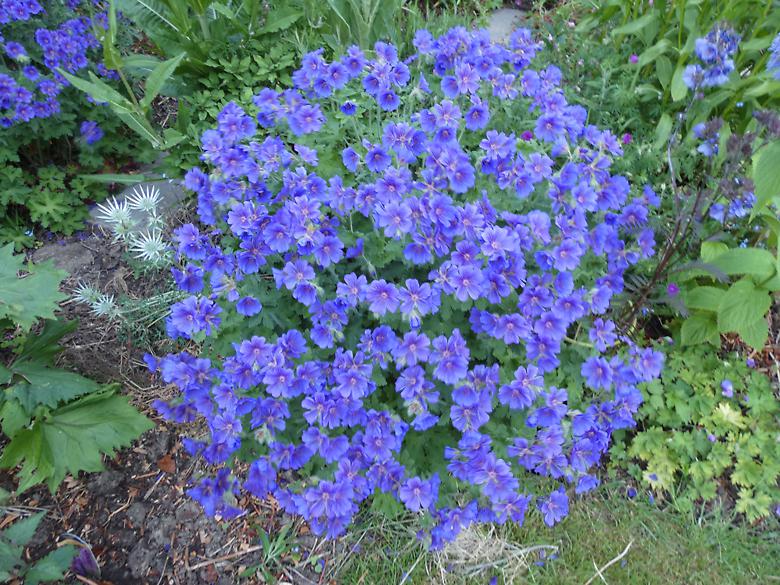 The Cordyline has two flower spikes this year. 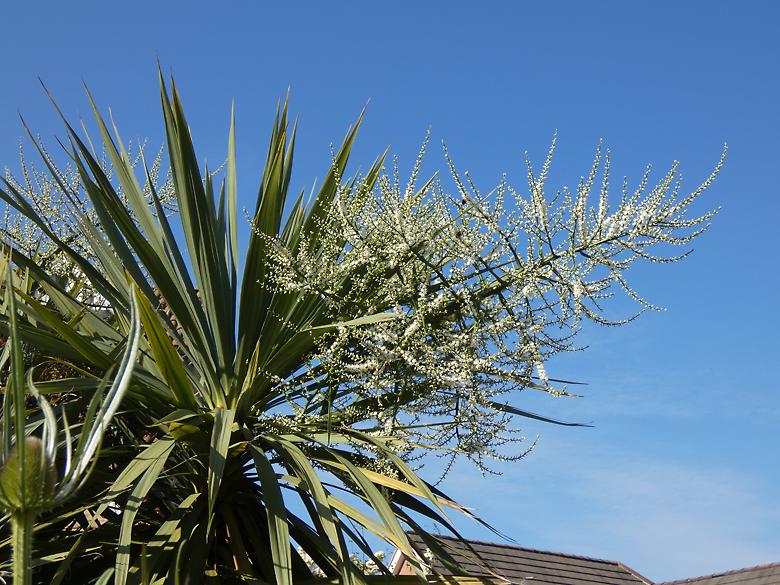 So it is orchid time again. A new one has appeared and one of the originals now has three flowering spikes.

This is the one by the back door. Its not a great growing position being right at the edge of the path, but it is doing fine, although not increasing like the other original one. 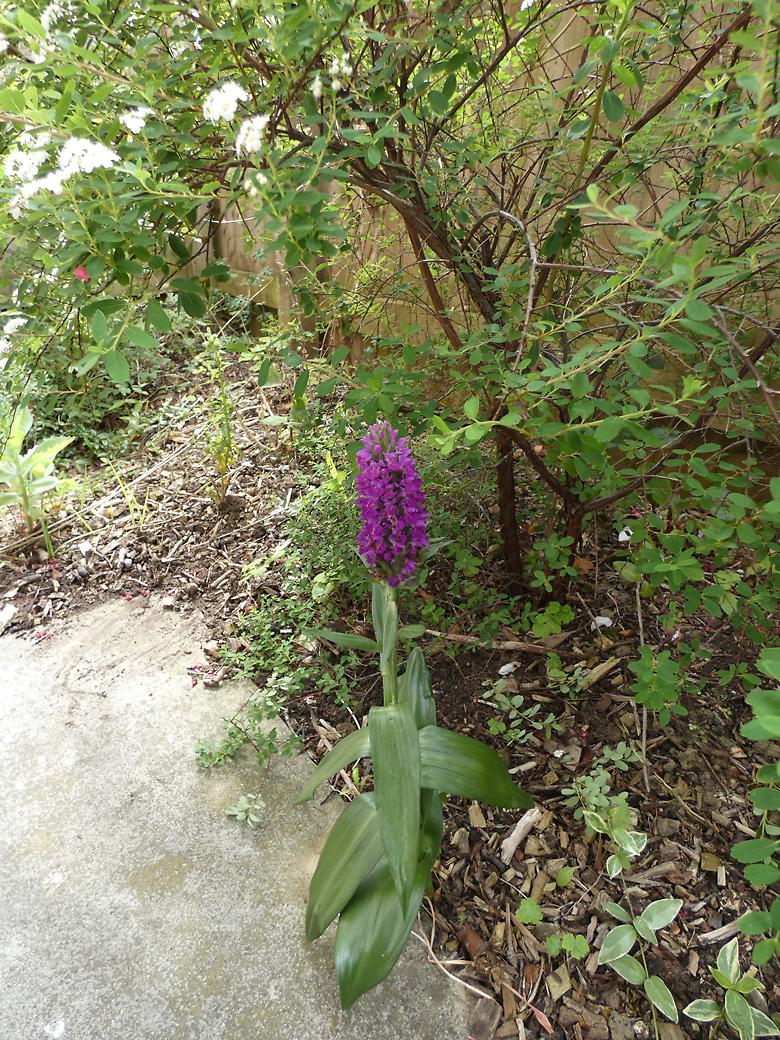 This is the other original one. It now has three flowers. Probably not fully out yet. 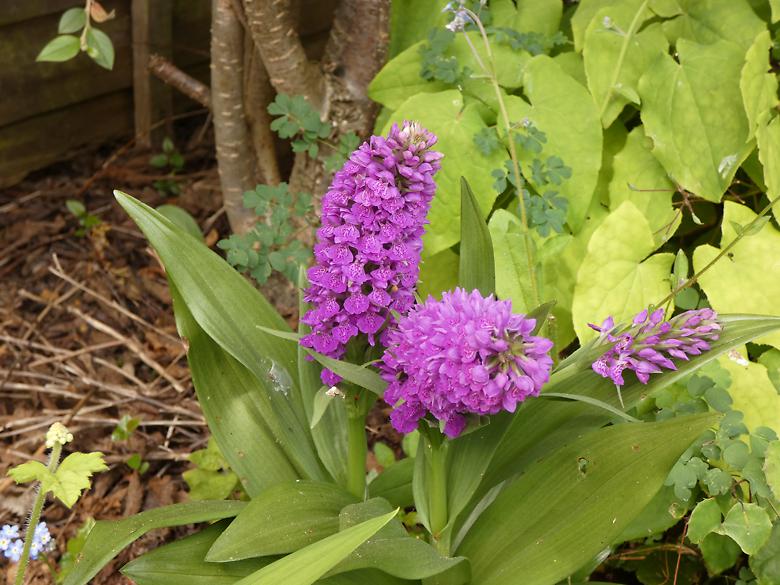 This is the one that appeared this year, the flower is much smaller in the first year. 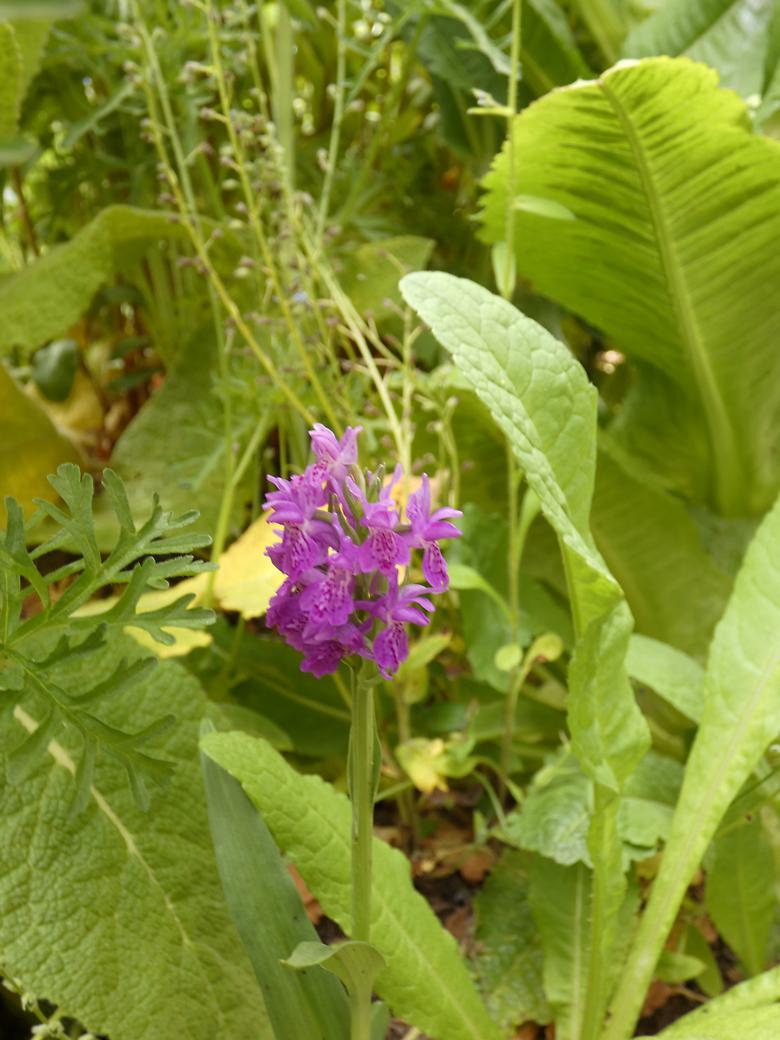 These are the three that first appeared last year. 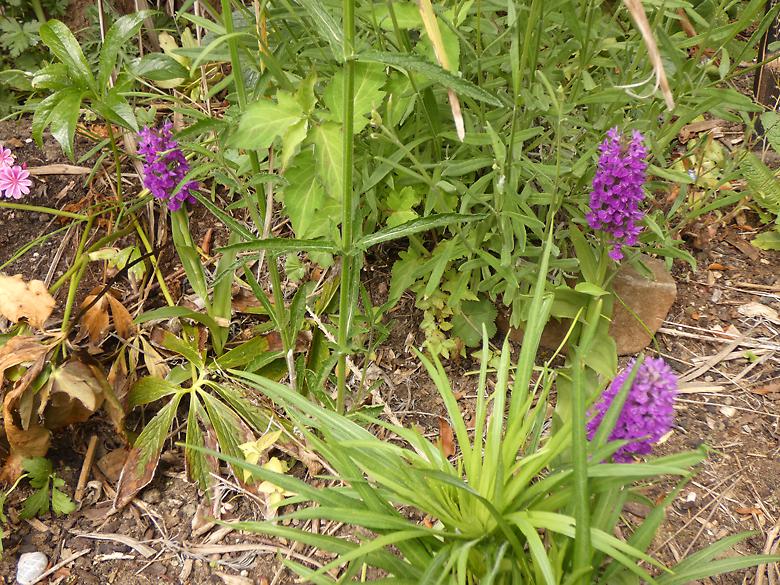 The following pictures are closer pictures of the newer ones. 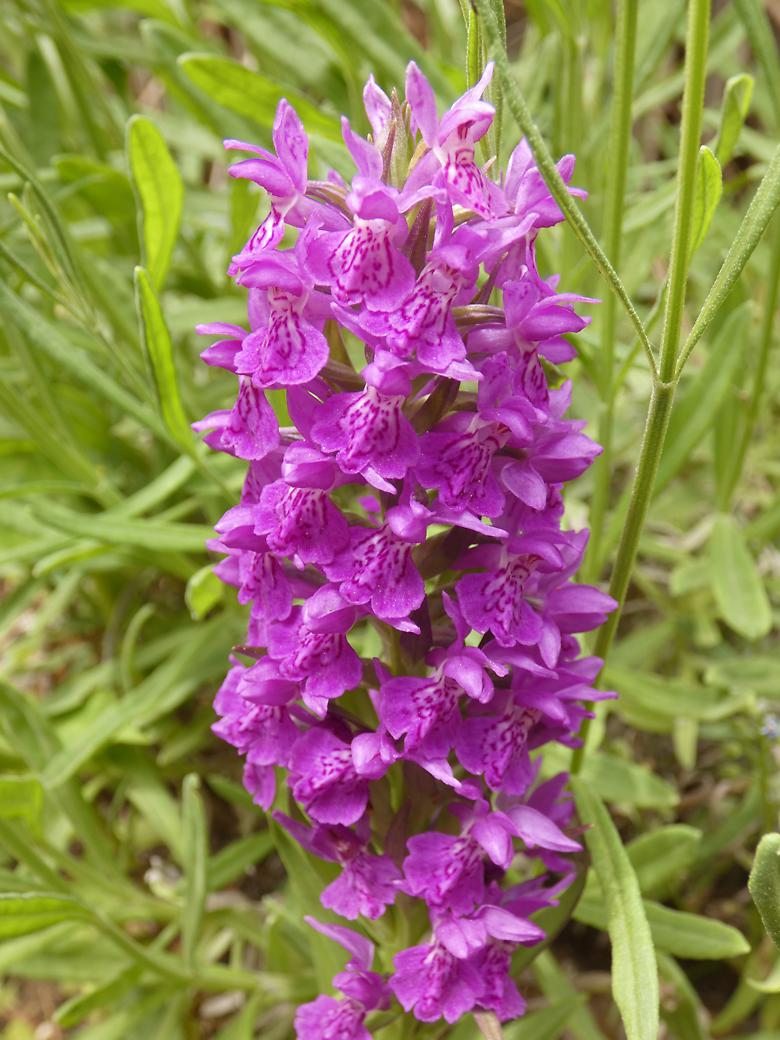 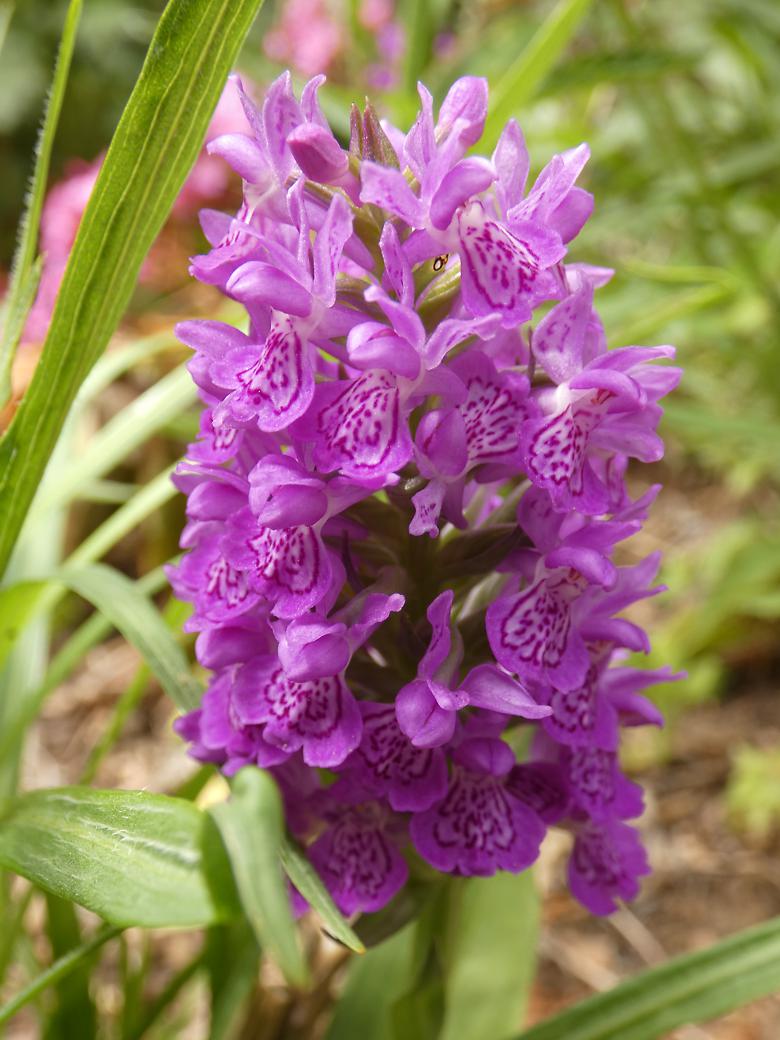 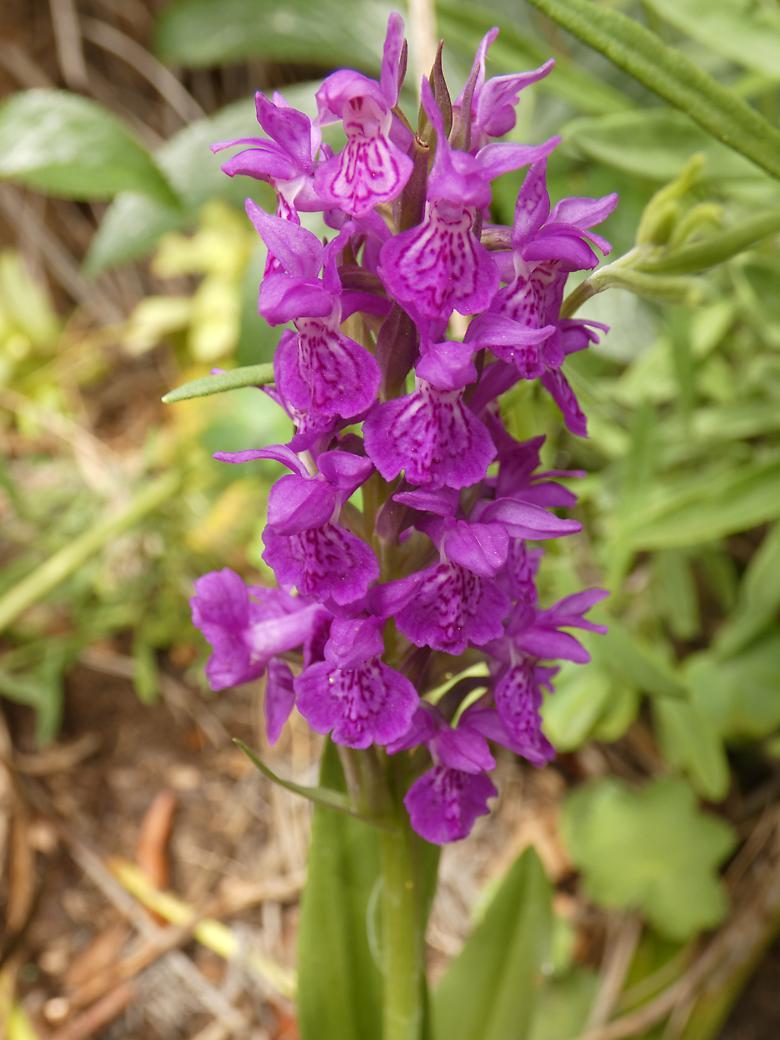 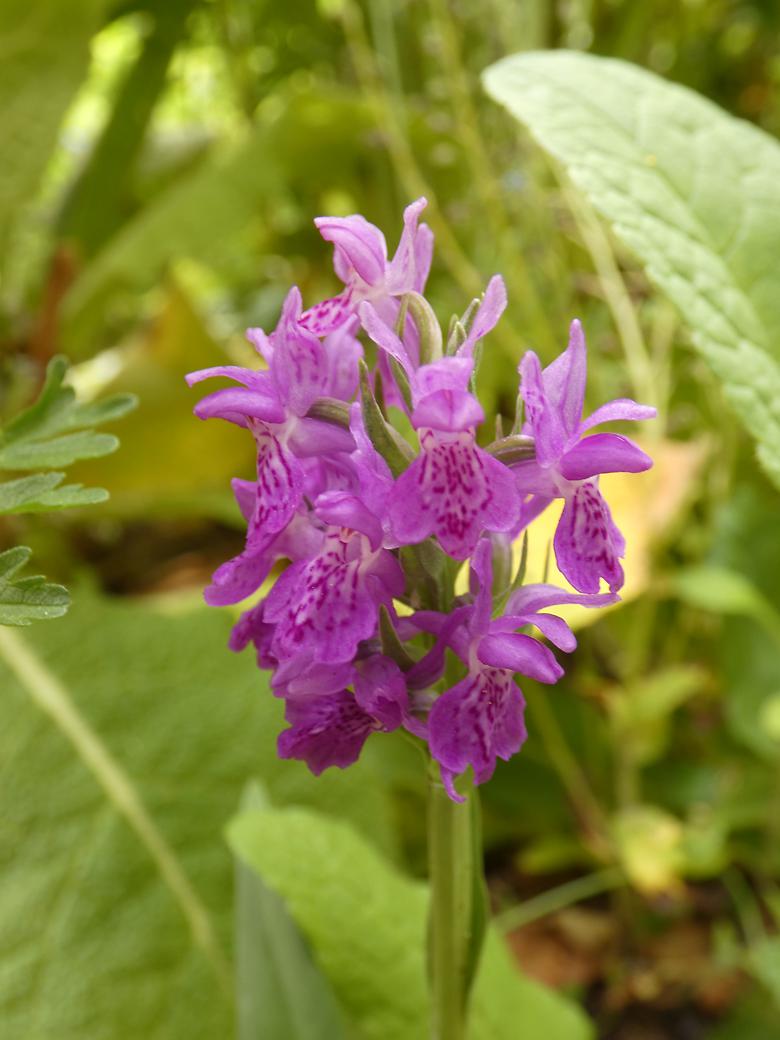 The cold spell continued and there were 2 days when the temperature dropped below zero. Last year was more normal with none.