My HPS seed order arrived this week. I have just compared them to the ones ordered and I received 7 out of the 11 ordered. The ones I didn't get were:

So that is four less problems I shall have in trying to find some space somewhere.

The packets all have a fair number of seeds in them, far more than I will need, so I can try sowing under different conditions and times. I'm aiming for getting more than one to germinate this year.

A few leaves of the original patch of Anemone blanda are starting to show. I was surprised to see them this early, so I looked back at previous years photos. Last year the first picture I have is on Feb 4th, whereas in 2017 I don't seem to have any pictures of the first leaves in spite of me having taken pictures of just about every other shoot that appeared.

So they may be a couple of weeks earlier than last year, which is not too strange given that last year was so much colder. I can't say for the year before that, but I guess it is normal for a normal winter. 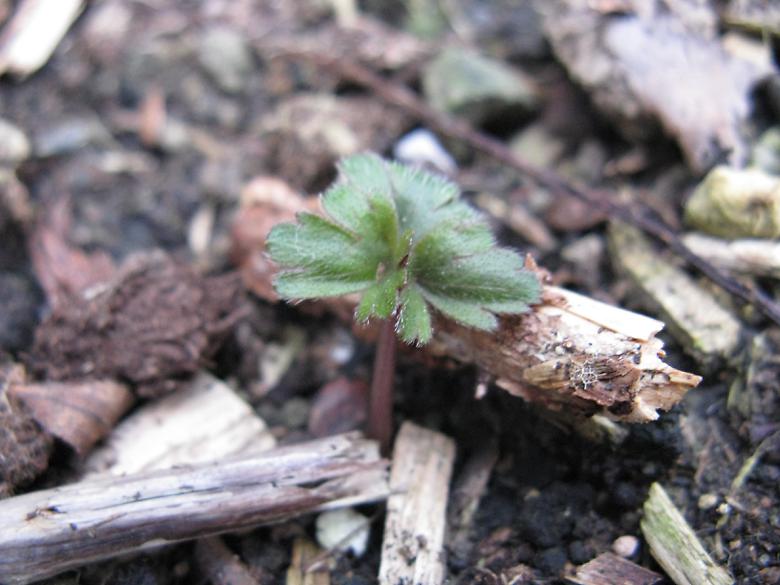 The end of my second year in the garden.

Last year was quite unusual in that there was snow and frozen ground, enough to kill off the tender plants. This year there has been barely a frost, and all the tender plant are still alive - past their best of course but still hanging on.

I bought a few plants that were on sale and planted them in the new section reclaimed from the lawn.

There are a few daffodils showing, for some reason one of the group always appears much earlier than the rest. Also signs of snowdrops. There is also one or two crocuses and a few of the Ipheion.

I'm going to stop giving lists of what is flowering during the month, but there was quite …

Six on Saturday - end of the year

Its nearly the end of the year, and with it the end of my second gardening year.

Last year, there was some very cold weather in December, which finished off the tender plants, but it has been much milder this year and I still have several flowers. More than six in fact, so leaving out the Geum, Helenium, Lavender, Penstemon, Sidalcea and Winter Jasmine.

I planted these all around the garden and they didn't do much, although it has been interesting seeing where they grew well and where not. I suspect that there may still be some interest in seeing which ones are overcome by the cold first.

Anyway, I don't believe that they have managed to get into any of my Sixes, so while there is still time, here is one of them. 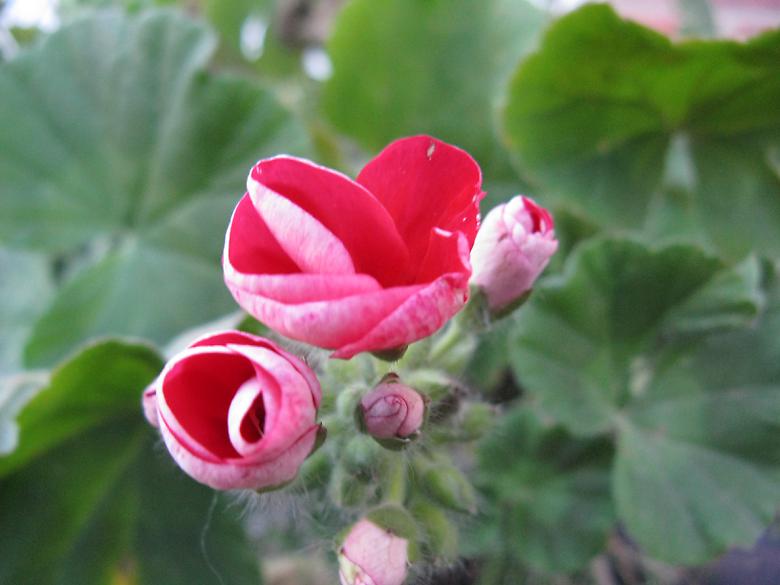 This has been flowering non-stop for ages, although the flowers …

The Hardy plant society do a seed distribution of seeds sent in by members. I just joined at the beginning of this year and I received a random selection of seeds. I only managed to grow three plants from them, all Potentillas.

This year, I wasn't going to order many but I ended up with 11, which may be more than I can easily manage. There is no guarantee that I will get these, and I didn't set up any replacements, so I may have fewer after all.

Here is the order:

There is surprisingly little going on in the garden at the moment. At this time last year there were daffodils appearing and some crocus too.

This Ipheion uniflorum 'Charlotte Bishop' is shooting up leaves just like they did last year in December.

I've planted 50 more of these, along with some I. 'Jesse'. It turned out that the later were very much smaller bulbs than the 'Charlotte Bishop' so we will have to see if they grow and flower as well this year.

A lot of rain especially towards the end and the ground is very wet. Very little sun gets to the garden at this time of the year.

There is not much to report this month, as things are slowing down and there is there is little new showing.

I started to plant the new bulbs.

The following were flowering at some point during the month.

This is Helenium 'Siesta' and the original stems were dying back, while new growth was appearing at the bottom. There are now a couple of fresh flowers. 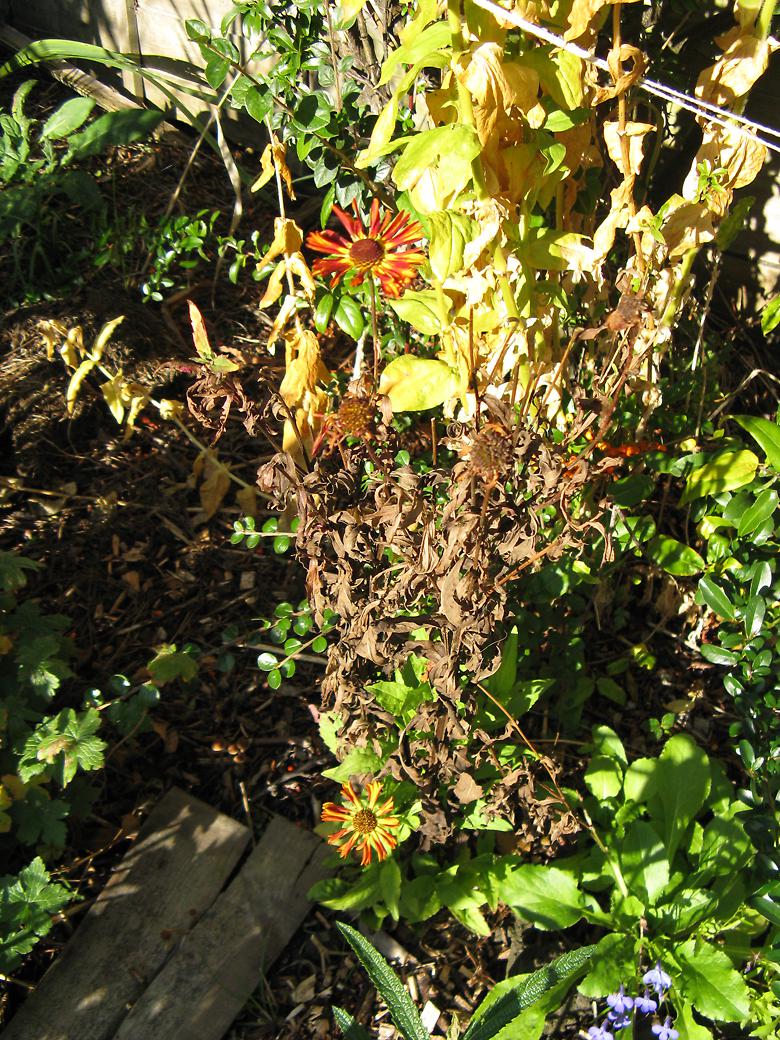 The snapdragons that were planted on the …

The week was very wet overall and earlier there was a cold east wind. Today it was quite bright until late afternoon when it started to rain again.

The sun hardly touches the ground in the back garden at this time of year, but it was bright enough for six photos so here we go for another Six on Saturday.

After the long flowering period of G. 'Totally tangerine' last year, I added a few more Geums to the garden this year. However, this year flowering was restricted to spring and early summer.

Except for this one, which has flowered continuously. 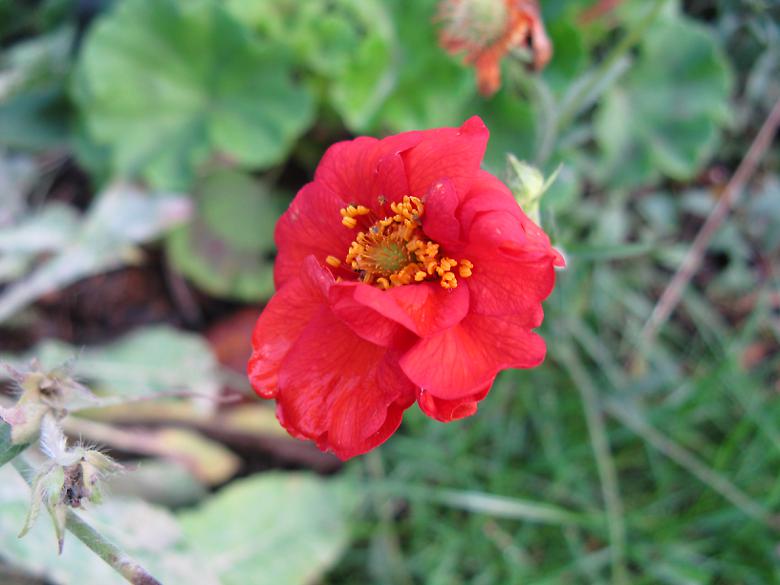 This grew after I dug up part of the left border. I've read every article on the internet on how tell the difference between dill and fennel and I still don't know which it is.