It will be Sunday soon, so without further introduction on to this week's Six things on a Saturday.

I read that Sedum are very good for attracting bees, hoverflies and butterflies, but I cannot say that I have seen an insect of any kind on these ones. Web searching does bring up many pictures, so it can't be a total myth, but here the bees are still sticking mostly to the lavender and Lythrum. Butterflies sometimes fly over, but don't find reason to land. 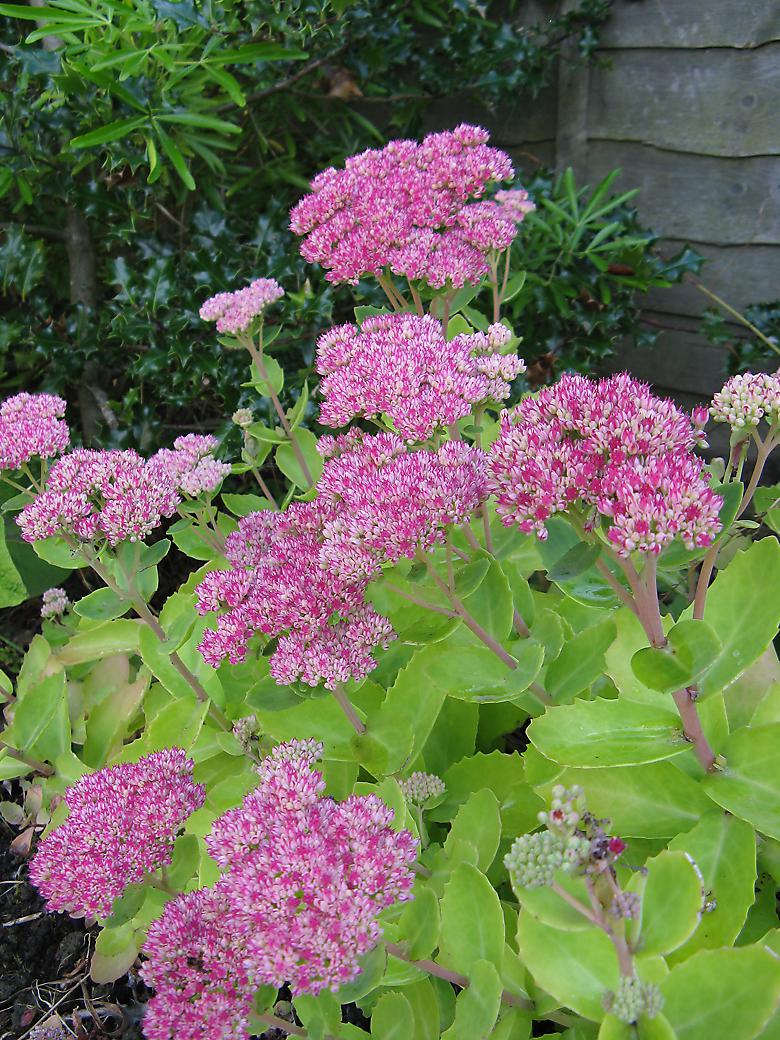 I really like these berries which form bright red bunches that contrast well with the leaves.

I believe it is a Cotoneaster Bullatus also known as a Hollyberry Cotoneaster and the berries do remind me of holly.

The birds are not eating the berries so far, but I believe that they do and this causes it to be quite invasive. There are certainly has been quite a few of these growing in the garden. I've pulled up the smaller ones and will be removing the larger ones before next year. 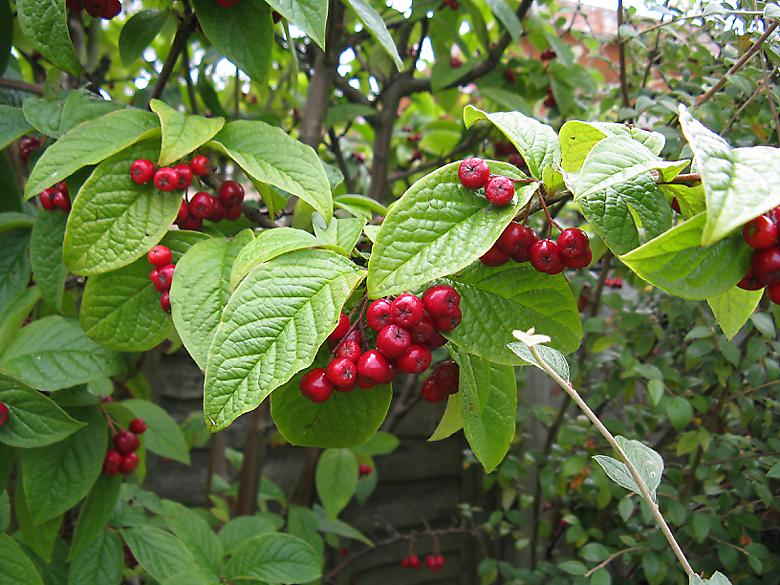 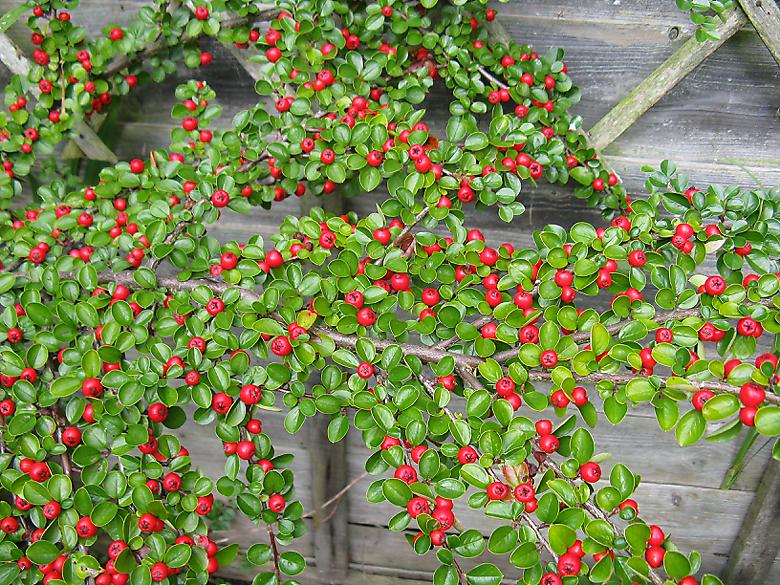 I featured this when first planted, but the flowers were a bit eaten around the edges. There is now a new flush of flowers so here it is again.

At long last things are coming together, I have this, a purple loosestrife, a Rudbeckia, Geum and Penstimon all in flower in the same section of the border.

It is a Gaillardia × grandiflora 'Sunset cutie'. 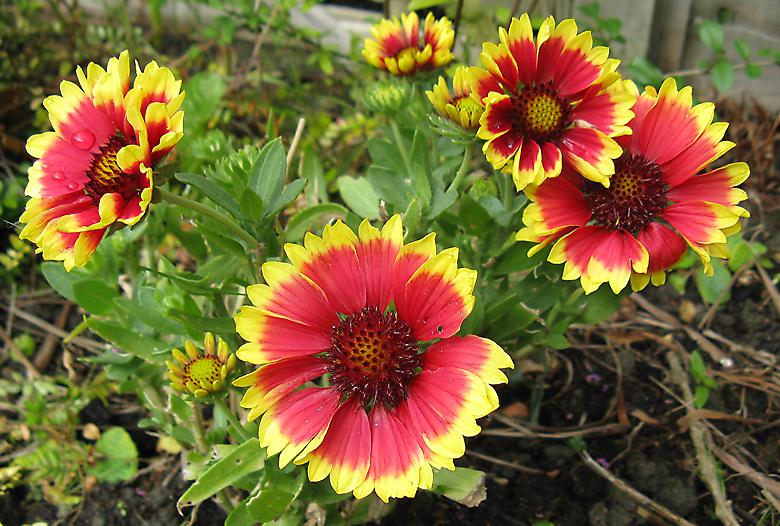 Earlier in the year I had a bag of onions in the kitchen and one of them was sprouting, so I thought I would plant it in the garden and see what happened. So I would like to think that it grew and is now flowering... but, but... there are three of them and they are too far apart to all be from 'my' onion.. or are they? I don't know.

Update: In the comments, Jim suggested that it looked like a Garlic Chive. I'd never thought to smell it before, but the crushed leaves do have a distinct garlic smell. The general look and size of the plant also matches, so that is probably what they are.

Anyway whatever it is, here is a photo, along with a bonus insect. 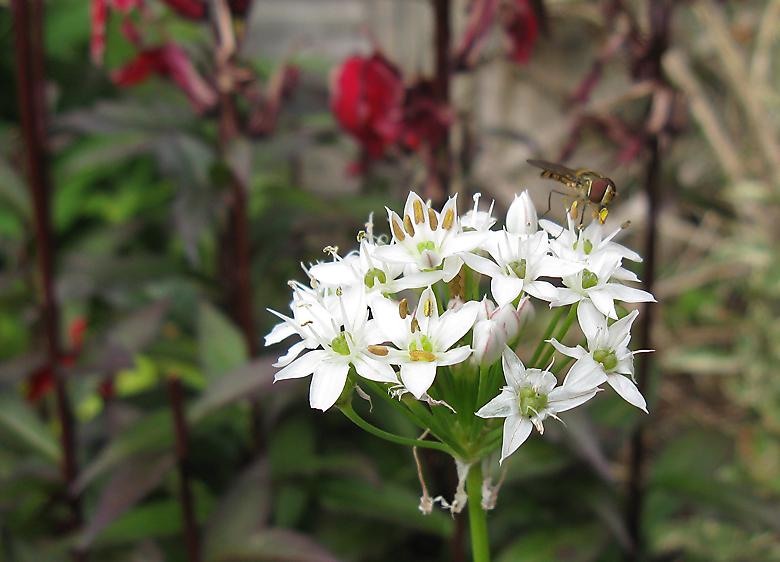 After a couple of commenters warned that a couple of my salvias were unlikely to survive the winter, I thought I would take cuttings as insurance.

This is "Wendy's wish". I took the cutting around 3 weeks ago if I remember correctly. I just put it into water in a plastic cup. Last week after only 2 weeks the roots were just starting to show, and during the week they have grown so quickly they are now circling around the cup. I shall be planting this into some compost tomorrow.

So that is a fitting end to the Six on Saturday meme hosted by The propagator blog.